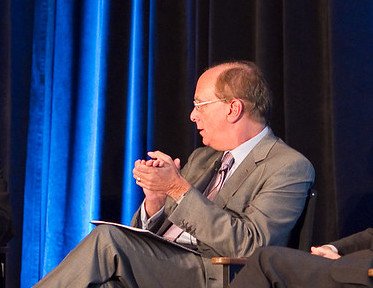 They point out that Larry Fink, head of the investment firm BlackRock (the largest manager of assets in the world)  has softened his tone. In the past (as in his 2020 letter to CEOs  of companies his firm invests in), he raised such questions as, “How can we model economic growth if emerging markets see their productivity decline due to extreme heat and other climate impacts?” And:

“[I]nvestors are increasingly reckoning with these questions and recognizing that climate risk is investment risk. Indeed, climate change is almost invariably the top issue that clients around the world raise with BlackRock. “

But not so much now, say Puzder and Soukup. His latest letter emphasizes the Covid-19 pandemic and speaks generally about preparing for the future.

What happened? Puzder and Soukup cite state actions, among other things (such as an “anti-woke” book by Soukup):

“For example, Texas has enacted legislation banning companies that engage in political vendettas against oil and gas or gun companies from doing business with the state. Lt. Gov. Dan Patrick has asked the state’s comptroller to place BlackRock on this list of banned companies. West Virginia Treasurer Riley Moore announced that the Board of Treasury Investments, which manages the state’s roughly $8 billion operating funds, will cease doing business with BlackRock because it embraces ‘”net zero” investment strategies’ that harm the energy sector, ‘while increasing investments in Chinese companies.'”

“Thankfully, a full-blown resistance movement is blossoming to make just that case to markets, managers, and governments—on behalf of the American people.”

Image of Larry Fink is by Daphne Borowski of the Financial Times and licensed through Creative Commons.