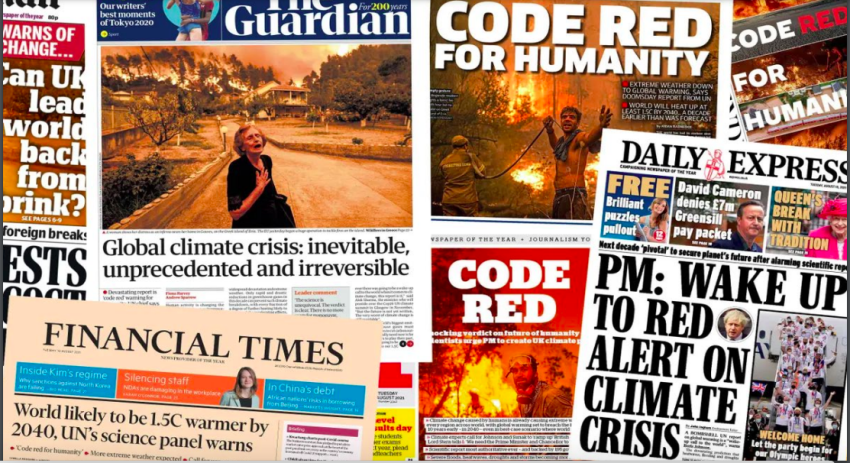 Roger Pielke, Jr., is a professor in the Department of Environmental Studies at the University of Colorado Boulder. Recipient of the Eduard Brückner Prize for interdisciplinary environmental research, Pielke is a critic of wild claims about the effects of climate change.

In a new video and  blog post, Pielke discusses the latest report of the UN’s Intergovernmental Panel on Climate Change. This big report, issued on August 9, 2021, is the one the UN secretary-general called a “code red for humanity.”  The secretary-general continued:

“The alarm bells are deafening, and the evidence is irrefutable:  greenhouse gas emissions from fossil fuel burning and deforestation are choking our planet and putting billions of people at immediate risk. Global heating is affecting every region on Earth, with many of the changes becoming irreversible.”

Not so fast. This rhetoric, picked up by newspapers around the country, is not only exaggerated, it misstates the findings of the 4000-page report, now called IPCC AR6, says Pielke.

In his blog, Pielke emphasizes two points. First, new estimates of greenhouse gas emissions now and in the future are much smaller than earlier ones (the IPCC’s first report came out in 1990).  Second, most extreme weather events have not gotten worse.

“[T]he near-term emissions scenarios of the International Energy Agency have in recent years been successively revised down, even before the COVID-19 pandemic. More generally, the scenarios that underlie much of the work of the Intergovernmental Panel on Climate Change and the research that it assesses are grossly out-of-date. In particular, across the board they depend on a core assumption of increased coal consumption through the rest of the 21st century. That’s not going to happen.

“This latter point should force a rethink of the current prioritization of studies in climate research, which lean heavily on these out-of-date scenarios.”

Pielke walks his listeners through a list of extreme weather events to determine what the latest IPCC report says about whether or not they have increased to date.  Most of them have not. (Succinct statements can be found in the power point slides  Pielke uses with the video).

The IPCC reports on a number of impacts from climate change, says Pielke. They are summarized in the table on the left.

Yes, according to the IPCC report, there have been more heat waves, more periods of  heavy precipitation, and more of some kinds of drought (but not others).

However, there have not been more flooding, tropical cyclones,  winter storms, thunderstorms, tornadoes, hail, lighting, extreme winds, or meteorological drought.

Those findings come from the “official” document on climate change. Pielke’s summaries are well worth looking at.