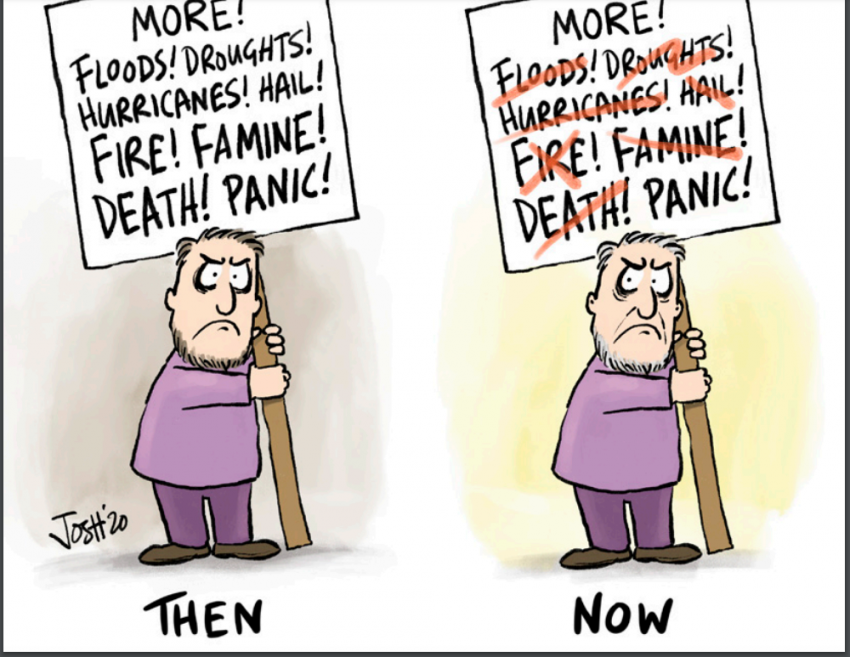 Paul Homewood of the Global Warming Policy Forum has put together recent predictions of climate change. A few:

Numerous reports in the 1970s reflected concern that the Earth was heading towards a new ice age. These are nowadays often dismissed as mere newspaper gossip, but they were far more than that. Some scientists forecast a full ice age, for instance NASA’s Dr Rasool, who said that air pollution would cause a drop in temperatures of six degrees.

Sea Levels Up by Three Feet.

In 1989, Noel Brown, director of the New York office of the UN Environment Program did not hold back, warning us that:

• entire nations could be wiped off the face of the Earth by rising sea levels if the global warming trend was not reversed by the year 2000;

• coastal flooding and crop failures would create an exodus of ‘eco-refugees’;

• sea levels would rise by up to three feet;

Here is a list of his alarums over the years:

• July 2009: He told an audience of industrialists and environmentalists at St James’s Palace that he had calculated that we had just 96 months left to save the world.

• July 2015: He warned that we had just 35 years to save the planet from catastrophic climate change

• July 2019: He warned global leaders that the next 18 months would decide our ability to keep climate change to survivable levels and to restore nature to the equilibrium needed for our survival.

•February 2020: He warned that humans had just ten years left to save the planet.

And there’s more, from the Pentagon, the U.K. Met Office, NASA, etc.