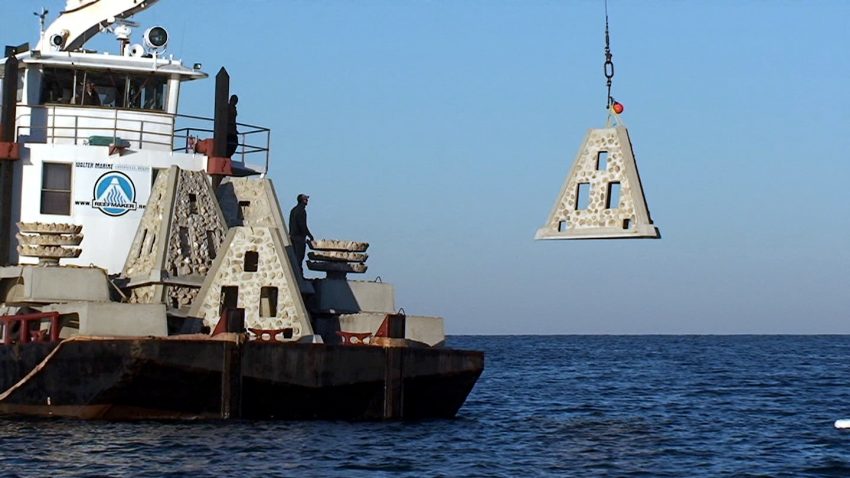 This is a guest post by Greg Rehmke, program director of Economic Thinking, an organization that fosters better understanding of economic principles.

Natural coral and oyster reefs around the world are considered “rainforests of the oceans,” home to rich and diverse ecosystems. Shipwrecks, offshore oil platforms, and artificial reefs teem with species all along the food chain creating rich scenery and fisheries prized for scuba diving and fishing. Public and private management of these still scarce underwater ecosystems can be challenging, but entrepreneurs around the world are fast expanding man-made reefs, a kind of underwater homesteading or “seasteading.”

If the term “artificial” makes you cringe,  Outdoor Alabama’s article,“Artificial Reef History,” will reassure you by explaining how artificial structures soon turn “natural”:

“[A]rtificial reefs can be created that over time will appear as natural reefs with similar communities of encrusting organisms and bait fish. As various encrusting organisms such as corals and sponges cover the artificial reef material, small animals take up residence. As these small animals become abundant larger animals are attracted and feed upon these. Yet larger fish are attracted to these and so on until a complete reef food web is created. At that point the artificial reef functions as a natural reef.”

Reefs are such rich producers of animal life that artificial reefs have been in use for a long time. In 2013 a 60,000 ton ancient rock structure was discovered in the Sea of Galilee, probably constructed between the 4th and 3rd centuries BCE. Researchers think that it was essentially an artificial reef.

Off the coast of Slaughter Beach, Del., is a spot called the Redbird Reef. It’s named after the decommissioned New York City Redbird subway train cars, noted for their red paint, that make up much of the reef.

With windows and doors removed, the reef allows for good water flow, and “invertebrates, like blue mussels that are attached to the whole surface of the car almost like a carpet,” says the CBC.

Redbird Reef attracts more than 10,000 angler trips each year. Last August the Reedville, an old coastal freighter and supply ship. was sunk there. With its “cavernous hold” and its impressive size— 80 feet from keel to the top of its stack, the freighter is likely to attract fish and fishermen.

Private firms prepare and deploy these undersea reefs for the state of Delaware, which has 14 permitted artificial reef sites. The reefs are, however, managed by the Delaware Department of Natural Resources and Environmental Control (DNREC).That has led to conflict and congestion as the state offers these valuable resources too cheaply or for free (with Delaware’s Redbird Reef, for example).

Fishing is big business, so the Department of Commerce and U.S. Fish and Wildlife Service (USFWS) are involved, along with NOAA (part of Commerce) and numerous other organizations. Divers like the reefs, too. There is plenty of federal oversight.

An alternative to sinking state and federal dollars into artificial reefs to boost fisheries is to allow privately-owned and managed offshore reefs. People are willing to pay for the fun and food from fishing, and thus offer a market opportunity that will also serve the environment.[2]

Alabama, with less than sixty miles of coastline along the Gulf of Mexico, has the most extensive artificial reefs in the United States. Flat sand bottom extends endlessly offshore, making most of the Gulf a barren desert that offers little opportunity for fish and other sea life.

But that has provided an opportunity for creativity, especially since Alabama and part of the Florida panhandle are the only places where private people or companies can build reefs. Since the 1950s old cars and other junk have been sunk offshore in both state and federal waters, as well as near-shore. As Outdoor Alabama explains:

“Those who wonder why anglers off Alabama catch more than 30 percent of the red snapper in the Gulf of Mexico despite having only 53 miles of coastline should have attended the Red Snapper Conference in Mobile last week. The key to Alabama’s phenomenal red snapper fishing is the more than 1,000 square miles just off the coast that are designated artificial reef zones.”

A key to Alabama’s reefs has been the fact that their locations are secret. Charter boat companies can hire reef companies to sink a reef structure at a location only they know, and when the red snapper and other fish arrive, they take their charter customers there and fishing revenues begin to flow.

In recent years, however, an avalanche of additional federal regulations has damaged this long-successful artificial reef program. For example, regulations mandate that there be a “marine archeologist in all aspects of performing a Phase 1 archeological survey,” plus a survey for impact on endangered species. As a result, expansion of Alabama’s artificial reefs in federal waters has stalled and new development has moved inside the 9-mile federal/state border. (Most fish inside 9 miles are state-managed, though the federal government continues to manage king mackerel, Spanish mackerel, and red drum.

Reefs across the Globe

Around the world, artificial reefs are being developed for recreational fisheries and scuba diving, not to mention the efforts to restore coral reefs. Governments, entrepreneurs, and organizations like the Nature Conservancy are all involved.

Gold Coast Dive Attractions lists artificial reefs in Australia. In addition, the Australian government and the Nature Conservancy have an ambitious artificial reef program, aiming partly at restoring the economy of coastal cities by increasing fishing opportunities  Other reefs are outlined by the Macau News Agency:

“To rebuild the reefs, thousands of tonnes of locally-sourced limestone rubble and recycled shells are laid on the ocean floor in order to create a reef base, which is then populated with millions of baby oysters bred by oyster farmers and shellfish hatcheries.”

New artificial reefs are being developed in the United Arab Emirates (UAE) as well, using coral itself and replanting it in an area extending over about 1900 square feet. in the Persian Gulf.  Artificial reefs are popular in Thailand, Jordan, Mexico, Bahrain, and many other countries. The Matador Network lists seven artificial reefs “every scuba diver needs to see.”

Surely, artificial reefs represent a brilliant way to develop ocean sport fishing as well as expand fisheries habitat. Charter fishing as well as scuba diving enterprises generate revenue to fund expanding private (and public) artificial reefs. Entrepreneurs should take up the challenge of finding the right price to balance congestion from too many fishermen and provide enjoyment by all. For a significant percentage of Americans, human flourishing includes fishing or scuba diving. Terraforming the ocean floor can create rich ecosystems—undersea rangeland for fish and people to develop and explore.