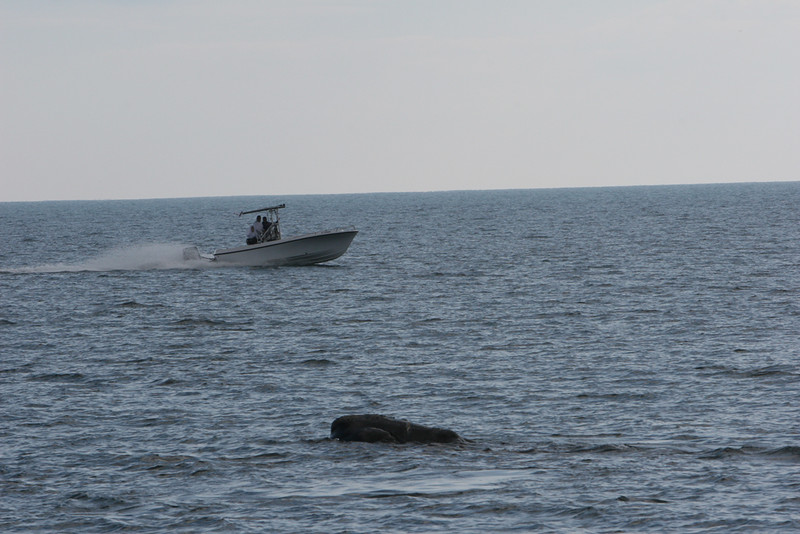 President Joe Biden’s grandiose plans for offshore industrial wind facilities lining the nation’s coasts have more than a few hurdles to clear before they can become reality. One of those is the fate of endangered North Atlantic right whales, whose migration route is in the bullseye of the offshore wind proposals.

Biden has initiated efforts to build 30,000 megawatts of traditional offshore wind facilities (with structures attached to the ocean floor) in federal waters by 2030, and an additional 15,000 megawatts of floating industrial offshore wind power by 2035. This is part of his plan to reduce U.S. greenhouse gas emissions to 50 percent below 2005 levels by 2030. And it means leasing federal waters in a wide swath along the east and west coasts and the Gulf of Mexico.

Economics should have doomed offshore industrial wind facilities from being considered in the first place, as wind power will force energy prices much higher. But now we have evidence that the impact on the North Atlantic right whale (NARW) will be severe.

Despite the regulatory protections supposedly afforded by these two laws and millions of dollars spent on recovery efforts, the number of right whales has continued to decline. Today there are only an estimated 350 in existence, with fewer than 100 of those breeding females.

Threats to the Whales

In 2021 the National Marine Fisheries Service (NMFS) determined the maximum number of NAR whales that can be lost if the stock is to have a chance to be sustainable. The number is 0.7—less than one per year. In practical terms this means that the whale population cannot afford to suffer the loss of even a single whale above natural mortality. Otherwise, the endangered NARW species is likely to slide into extinction.

Collisions with ships are the single biggest human-caused reason for whale deaths in U. S. waters. In recognition of this fact, the Fisheries Service has proposed stricter speed restrictions on vessels traveling through migration corridors during the times whales are known to pass through those areas. Under a rule currently under consideration, “[a]ll vessels 65 feet (19.8 meters) or longer must travel at 10 knots or less in certain locations (called Seasonal Management Areas or SMAs) along the U.S. east coast at certain times of the year to reduce the threat of vessel collisions with endangered North Atlantic right whales.” However, the service announced that it may consider a proposal offered by the Center for Biological Diversity and other environmental groups to expand the size and time periods of restriction and apply the 10-knots-or-less rule to smaller vessels.

It seems that more than half of small boating and shipping traffic in the seasonal management areas travel at over 10 knots, with that number rising to 85 percent for small, fast pilot boats. It is more difficult for a whale to avoid collisions with small but fast sea-going craft, yet such collisions can be just as deadly, especially to young whales, as with the larger boats.

So now the Biden administration wants to allow, encourage, permit, and indeed subsidize hundreds if not thousands of offshore wind turbines in the midst of the whale’s critical habitat, and, perhaps most importantly, migration corridors!

As proposed, this offshore wind project is directly in the annual migration path of the North Atlantic right whales. Dominion Energy has applied to erect 176 wind turbines, covering an area of approximately 10 miles by 15 miles—equal to the size of an 85,000-sq.-ft. football field —27 miles off the coast of Virginia Beach. Each turbine will sit atop a monopole (its base attached to the ocean floor) extending a minimum of 80 feet into the water and about 120 feet into the ocean floor, and its height above the water will top 620 feet.

During the construction phase, dozens of ships and service boats will be traversing the whales’ migration route. Even after construction has ended, service boats will pass in and out of the area to perform routine maintenance or to conduct repairs. Increasing boat and ship traffic in the NARW migration route significantly raises the chances of additional ship strikes on the whales.

In addition, NARWs, like other whale species, are highly sensitive to sound, which they use to navigate and locate prey. The National Oceanic and Atmospheric Administration (NOAA) lists 120 decibels (dB) as the maximum safe limit for underwater sound, yet research indicates that a 10-MW turbine generates 180 dB underwater, exceeding the limit by 50 percent.

Dominion Energy has proposed using 12- to 15-MW turbines at its wind project. These more-powerful turbines are guaranteed to generate even greater underwater sound. Sound from 10-MW turbines does not drop to the assumed safe maximum level of 120 dB until 20 miles from the generating sources. This means whales will be affected well beyond the 10 x 15 miles area of the CVOWP’s actual ocean footprint.

The subsea infrasound and vibrations generated by the turbines are virtually guaranteed to force the few remaining right whales out of their critical migration routes and into one of the busiest shipping corridors in the world.

This will make a bad situation worse, since ship collisions are already the largest single cause of the whales’ mortality. Since there is no evidence the sound or wind infrastructure will similarly displace the right whales’ prey species, they will be left without their preferred food source, at least in the volumes they are accustomed to (unless they adapt to tolerate the sound).

Even if the whales do prove able to adapt to and tolerate the sound, it is almost certainly going to take time, time the whales don’t have if the Marine Service’s determination of the safe number of human-caused NARW mortality per year, under 0.7 whales, is correct.

The undersea monopoles will pose new navigation hazards. Though spaced far apart—so individual whales should be able to easily navigate around them—should we really be erecting additional complications or barriers that endangered NARWs will have to avoid? In addition, although I’m unaware of any research on this topic, it seems logical that if the whales’ prey species respond to offshore turbines the way that prey of protected hawks and other raptors have done on land, over time they will congregate near the monopoles when whales are in the area. This will make it harder for the whales to avoid the monopoles when feeding.

Recent research has revealed a previously unknown threat that offshore industrial wind facilities, like the Virginia project, pose to the NARW. Numerical modeling indicates that the “wind wake” effect of offshore wind projects could dampen annual primary production of biomass, the plants and animals in the area, by as much or more than 10 percent. Less food for endangered whales is not a good thing. The same modeling indicates the offshore industrial wind projects slow ocean currents, resulting in decreased cycling of dissolved oxygen and low oxygen concentrations. Whales, being mammals, should not be directly affected by reduced oxygen concentrations, but their prey species and the food chain the prey rely upon for survival certainly will be.

In conclusion, the Dominion Energy project and other offshore wind projects being considered up and down the Atlantic coast of the United States pose a clear danger to the continued survival of the North Atlantic right whale. The companies and agencies involved in permitting should transparently disclose any research or studies examining these issues to allow the public to weigh in on the relative merits of the projects and to allow public officials to make educated decisions. In the light of the right whales’ status as an endangered and depleted species, until the dangers the Dominion Energy project poses to the whales are fully understood and plans to mitigate any harm are fully developed, neither federal nor state governments should issue licenses, permits, or otherwise provide support for this project or any other offshore wind projects in NARW habitat or migration corridors.

The author was one of three representatives of public interest groups who filed comments with the Bureau of Ocean Energy Management (BOEM) on the wind power’s potential interference with right whales.

Image by Florida Fish and Wildlife Conservation Commission, NOAA Research Permit # 775-1875 under a Creative Commons license. (Boats must stay 500 yards away from whales.)