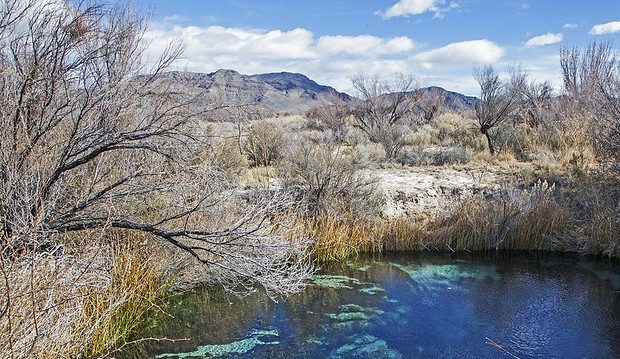 The U.S. Federal Claims Court decided on October 25 that the Fish and Wildlife Service (FWS) does not need to compensate a Nevada property owner for damages when it diverted a Nevada stream that had flowed onto the property. Flooding  followed four times, but the court concluded that the diversion and the floods were not necessarily linked.

The owner is a 40-acre church camp, Ministeria Roca Solida. Located in the Mojave desert, the camp is an inholding in the Ash Meadow National Wildlife Refuge. The camp is owned by Pastor Victor Fuentes and his wife, Annette. Fuentes, a Cuban resident, swam 7 miles to Guantanamo Bay Naval Base in 1991 where he received asylum. He later became a church pastor. The Fuentes bought the camp in 2006, calling it Patch of Heaven because its stream (now gone) made the area a green oasis in the desert. .

It is  “a sanctuary and ministry for troubled Las Vegas youth,” writes the Mountain States Legal Foundation (MSLF), which represented the Fuentes in court. But in 2010, the Fish and Wildlife Service diverted the stream, presumably to an earlier flow path. Subsequently, the camp was flooded four times. The case has been litigated ever since.

“[T]he case shows the immense and unfair advantage federal agencies enjoy when they set out to exert their will over frequently underfunded and outgunned average citizens,” wrote the MSLF.

“It is undisputed that as a result of the [FWS] project, the Patch of Heaven lost one of its most attractive features—the supply of spring water that had flowed through the property in a man-made ditch and which the Ministry had used for recreational purposes and to perform baptisms. . . .

“To make matters worse, in December 2010, just a few months after the bulk of the work on the restoration channel was completed, the area experienced five or six days of very heavy rainfall. Stormwater coming down from the upper watershed of the Carson Slough flooded the Patch of Heaven, damaging camp buildings, impeding access to the property, and sweeping away grass, trees, and other vegetation.”

“In short, the Ministry failed to prove that the restoration project caused the flooding of its property. To the contrary, the weight of the evidence shows that the property would have flooded even if the berm and restoration channel had never been built. The Ministry has therefore failed to meet its burden to show causation.”

“It was the Ministry’s burden to prove that the project caused its property to flood and also that the floods would not have occurred were it not for the berm and restoration channel.”

The 24,000-acre Ash Meadows National Wildlife Refuge has a relatively short history. It was created in 1984 by the Fish and Wildlife Service with funds provided by the Nature Conservancy (TNC). The conservancy bought 13,320 acres in  1983 and turned them over to the federal agency.  TNC subsequently bought a 9-acre  property for the FWS. While small, the Nature Conservancy says purchase of that 9-acre inholding has “huge conservation importance for Ash Meadows” because it will allow the FWS to remove a road that may have affected a stream’s flow.

As Mountain States points out, the Fish and Wildlife Service has been seeking to oust private owners from the refuge.  The  refuge was created in 1984  to forestall a housing subdivision. Now the agency appears to be preventing the full operation of a church camp for youth.

3 thoughts on “Watch Out for the Feds, Even If It’s Your Property and Even If It is a Church Camp for Troubled Youth”