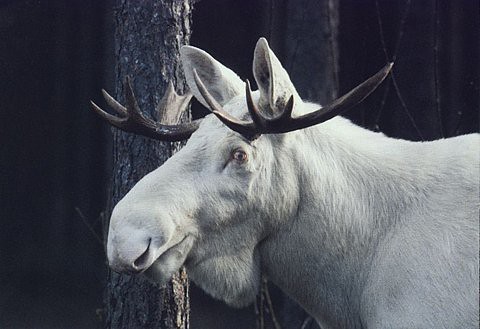 What ethical and legal claims can religion can make on resources and the property of others who do not share the faith?

We begin with hunting.

Every hunting season brings outrage and lament at the news that a hunter has killed a “white moose.”  The animal killed could be elk, deer, or any animal that produces albinos or in which a recessive gene makes a rare breakthrough and creates a white offspring. If the killing takes place anywhere near a population of American Indians, we almost inevitably hear that the animal is “sacred.”

Many of the non-indigenous citizenry who protest these killings know little about pre-European religions. In their love of the exotic in nature, however, they sympathize with Indian beliefs and invoke them to protect the rare white animals as sacred beings.

While they deplore Christian and Jewish fundamentalists, they adore shamans and Indian religions. They laugh at believers who say the earth is only 6,000 years old but they applaud Troy Woodhouse, a member of the Cree-Ojibway First Nation in Ontario province who said of the white moose, “Nobody knows exactly how many are in the area, so the loss of a single spirit moose is one too many.”

They have reverence for the idea that killing a white moose brings punishment from the spirits or gods.

They would not dare to criticize the Lakota activist, sometimes called a healer or shaman, Floyd Looks for Buffalo Hand, who said of a white buffalo born on a Wisconsin truck driver’s land:  “In North American Indian country, we’ve been anticipating her coming since 1933-34,” The second coming of Christ is like this; that is what is happening.”

Whenever beliefs run this deep the believers inevitably try to weave them into the laws of the land, regulating the faithful as well as the general public. Canada has created laws that make killing white moose illegal in many territories, thus imposing religious demands on the rights of all citizens and visitors. The ban on killing white moose puts religious law over natural law—or if not natural law, at least the regulations imposed by genetics and evolution.

If these transformations of minority religion into laws for the majority were limited to hunting, the legal prohibitions would be a minor mixing of religion and civil society. But “sacred” has become the battle flag and the nolo me tangere  behind important violations of property rights and business disruption.

Recall the Dakota Pipeline protests that began in 2016 and temporarily halted millions of dollars in work. The protests spread to cities across the country where opponents of fossil fuel found religion. Troy Eid, an attorney and mediator in Denver, Colorado told InsideEnergy.org, “It would be akin to the Sistine Chapel, running some kind of infrastructure through it, a pipeline, or a road.” A case study at University of Colorado Boulder estimated that the pipeline company lost more than $7.5 billion because of the protests and claims of sacred lands.

Perhaps the protesters are sincere, but when the subject is global warming or Covid 19, they chant “follow the science.” For a white moose, or to stop a fossil fuel project, they follow the religion. Senator Bernie Sanders, a non-practicing Jew, called on President Obama to halt the pipeline and if necessary, make the area into a national monument.

No one bothered to mention the fact that the sacred lands of the Sioux had been Sioux land for a mere 500 years or so since the once itinerant, walking Sioux acquired horses and burned down large earth mound towns and slaughtered the Mandan and Arikara occupants. (Working with the University of South Dakota in the mid-1950s, I was a digger excavating the Mandan site at Swan Creek, a village of some 3,000 before the Sioux overran its stockades. That site is now under the Oahe Reservoir near the Dakota Pipe Line route.)

Obama halted the pipeline work by having the Corps of Engineers reconsider its environmental assessment. Sanders also joined an Apache protest against mining on federal lands in Arizona that today’s Apache claim are sacred.

Claims of sacred land have also been used by environmental groups against President Trump’s border wall construction in Organ Pipe Cactus National Monument. “This is a new low even for the Trump administration,” said Laiken Jordahl with  the nonprofit Center for Biological Diversity in Arizona. “They’re moving forward with complete disregard of sacred sites and indigenous sovereignty.”

As far as I’ve been able to determine, neither Sanders nor any of the alternative energy activists have organized protests on behalf of the Old Order Amish Swartzentruber sect who oppose the plans of Invenergy’s electric generating complex south of Buffalo, N.Y. The sect’s attorney told Forbes Magazine, “Their religious beliefs dictate that they don’t live near industrial development.” Could the lack of sympathy be that they are Christians or that Invenergy’s complex is not a pipeline but a huge windfarm?

Traces of cause and effect between claims of sacred and laws about resources subject to those claims range from clear to speculative. The legal and financial consequences are real. Muslim countries are not the only places where laws require citizens and non citizens to obey purely religious dictates.

The ban on killing white moose and other legal concessions to claims of sacred put religious law over natural law—or if not natural law at least the regulations imposed by genetics and evolution.

Let’s be clear that my personal opinions on the merits of fossil fuel, a border wall, mining, and hunting or anyone’s religion are not the issue. Same for the benefits and pleasures of healthy forests and desert landscapes carved by millions of years of wind and water.

At issue is whether the claim that plants, animals, or lands that some religious group claims as sacred should be protected if those resources are either owned by private parties or by government—i.e., citizens of all religions and no religion.

Events on December 20, 2020 at the Great Snake Mound in Ohio illustrate the folly of imposing religious belief on public or private lands. Two middle-aged men faced off about whose religion had the right to be on this national monument.

Dave Daubenmire, a pastor for Pass the Salt Christians had come to lead prayer at the mound to put down dark Satanic energy that he believed came from the mound. Philip Yenyo, the executive director of the American Indian Movement  of Ohio, had heard of the Christians’ plan and had come to drive them off. “It’s a sacred site for us, but other people with other faith beliefs think they have the right to go there and do their ceremonies. In our opinion, they don’t,” Yenyo told the Cincinnati Enquirer. “It would be like me going into a church and doing my ceremonies in that church—disregarding and disrespecting their believes.”

A long look for Yenyo’s tribal affiliation reveals nothing except he is a native of Cleveland, but certainly whatever tribe he might descend from could have little or no affiliation with the mound builders, who disappeared over 2,000 years ago. By such loose affiliation I have a better claim to sacred ancestral ground for my Scots-Cumbrian and Ashkenazi ancestors all over Europe, and I can prove that ancestry by DNA.

The label “sacred” is an ideological or emotional trespassing sign. This sign has been posted most often in the past century by environmentalists. Most are either opportunists co-opting religion for their cause or they are religio-environmentalists to whom biological sciences are largely as irrelevant as they are to creationists. A very small minority are tribal members of tribes who embrace the old beliefs about human-like spirits inhabiting plants, animals, and even large landscapes, a kind of fundamentalist paganism. The non-Indian version of this paganism dresses up as Gaia, Mother Earth, New Age shamans, various forms of nature worship. Their world is as full of sin as any Puritan’s. Gaia’s ungrateful human children are always wounding her, suffocating her with noxious gases. If the earth is the goddess Gaia, then everything is sacred, or at least anything a Gaian values is sacred.

Most Americans like to respect what others feel is sacred, but how old must sacred be and what if science says it’s just biology after all—like a white moose? The same people who adamantly (and rightly) oppose teaching creationism in schools are all for creationism in defending a sacred plant, animal or landscape. They apparently do not recognize that living things and landscapes can only be sacred if there’s a divine Creator.

Accepting “sacred” as a restriction on private or government property raises troubling questions.

The title of this article is “White Moose and Public Sacrifice.” The last word illustrates our theme. Embedded in the word sacrifice are two ancient roots: sacer or something holy and facere, to make. Those who insist that law embody their religious beliefs are asking law to force others to make their property sacred. Thus, Muslim countries are not the only places where laws require citizens and non-citizens to bear the economic and personal burdens of purely religious dictates.

Religion is a personal matter, and the important guarantees of religious freedom are necessary for both a civil society and Religious freedom includes both the personal right to practice a religion and the freedom from being forced to sacrifice to someone else’s religion.