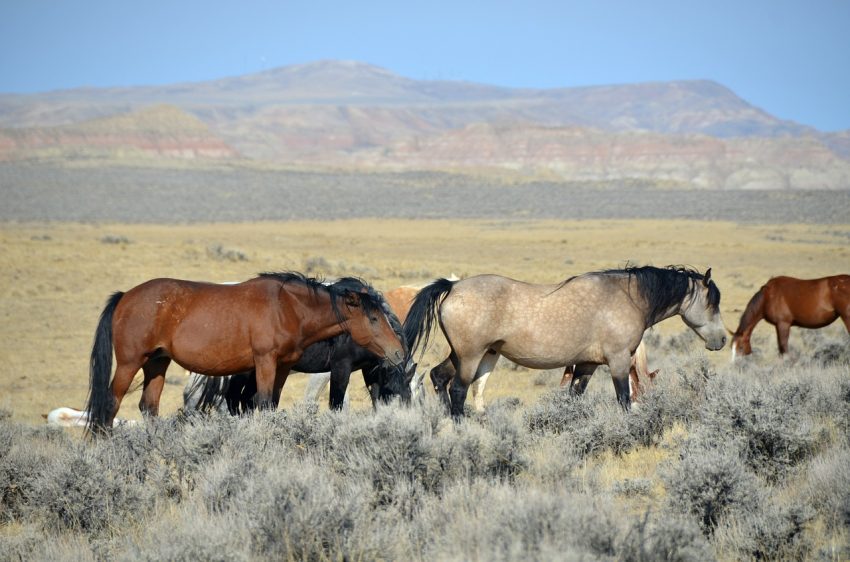 Once again, the Bureau of Land Management (BLM)  is faced with opposition to its way of dealing with wild horses on public rangeland. For many decades, wild horses and burros have proliferated on public lands—descendants of escaped horses going back as far as the years of Spanish exploration, plus horses lost or abandoned by settlers and the U. S. Cavalry. The absence of predators led to overpopulation, which caused the destruction of grass on the rangelands and thus often to horses’ starvation.

In the 1950s, wild horses were being captured and taken to slaughter. But then Velma B. Johnson, “Wild Horse Annie,” led a movement of school children to oppose the slaughter and the BLM was forced to do something. That something has been to round up the horses and keep them in holding pens (no longer “wild”).

But in 2019 the Bureau created the Adoption Incentive Program, which provides $1000 for each person or family that adopted a horse and maintained it.

That seemed to be working well, but then “Wild Annie” rode again, in the form of a  recent New York Times article by David Phillips.

The news was that “adopted” horses  were being sold at auction and slaughtered. (The slaughtered horses were then sent to other countries  where horsemeat is eaten.)  This has led to a mini-uproar in Congress, with calls to eliminate the program.

In response, Hannah Downey of PERC (the Property and Environment Research Center) appeared before the BLM’s National Wild Horse and Burro Advisory Board at the end of June. Here are excerpts from her remarks:

“As someone concerned about ecosystem management and the balance of forage and water needs with other species, there are too many horses on too little land. The reality is that for every iconic Western image of a wild horse galloping across the range, there’s another heartbreaking image of a foal with ribs jutting out, starving. We have more than three times the designated level of wild horses and burros on public rangelands, competing with at-risk species like sage grouse for water and habitat. But it’s not as simple as moving wild horses off the range –  currently 50,000 horses and burros remain in off-range facilities costing taxpayers nearly $50 million per year.”

Regarding the Adoption Incentive Program:

“I understand that much of the current controversy over the program surrounds a study that found that 18 animals adopted through this program ended up at slaughter auctions. I share concerns about ensuring adopted animals are well cared for. Adopters, however, do sign an agreement pledging to not sell the animal for slaughter. My concern, then, is with the enforcement of that contract rather than the program as a whole.”

“So I’d like to encourage the BLM and the Wild Horse and Burro Program to focus their efforts on assuring and enhancing the integrity of the Adoption Incentive Payment program through enforcement, rather than heeding calls to dismantle the program as a whole.”

Image by Steppinstars of Pixabay.