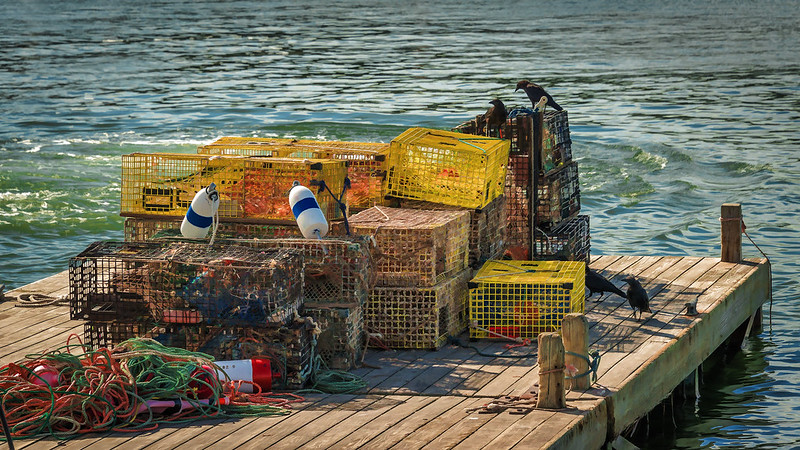 Hypocrisy abounds in the White House when it comes to ocean wildlife along the East Coast of the U.S.

On December 1, President Joe Biden hosted a state dinner with French President Emmanuel Macron, at which more than 200 Maine lobsters were served. As noted by The Guardian, just days earlier the retailer Whole Foods announced it would cease carrying Maine lobsters, at least for a time, because the London-based Marine Stewardship Council had decertified Maine’s lobster fishery due to its impact on North American right whales.

The Marine Stewardship Council claims it acted in response to the National Marine Fisheries Service (NMFS), an office in the National Atmospheric and Oceanic Administration (NOAA), which has issued new restrictions on Maine’s lobster fishers to protect North American right whales from entanglement with lobster fishing gear. Maine’s lobster fishing industry is fighting the rules. In a lawsuit, its representatives claim the new rules would decimate the industry, forcing the majority of lobstermen, who are family-owned, single-boat operators to cease operations. This would leave only a few large-scale operators, who have permits to operate in federal as well as state waters, catching lobster in Maine’s waters.

So, the Biden administration’s hypocrisy is clear and twofold:

Hypocrisy # 1: It serves Maine lobsters to its elite friends and allies, even as it is pushing to shut down the lobster industry. That’s like taking private jets to conferences about fighting climate change, while being willing to raise the cost of commercial travel for average people by taxing it in order to fight climate change (as the European Union is doing; the proposed tax wouldn’t apply to private or corporate jets!) Who would do that?

Hypocrisy #2: As for whales, Biden’s hypocrisy could qualify as an extinction-level event. The North American right whale has been listed as endangered ever since the Endangered Species Act was adopted in 1973—and also as “depleted” under the Marine Mammals Protection Act since it was enacted in 1972. In an earlier post on Liberty & Ecology, I noted that collisions with ships are the single biggest human-caused reason for whale deaths in U. S. waters. That is why the NMFS has proposed stricter speed restrictions on vessels traveling through migration corridors and critical habitat.

Are the Biden restrictions on lobster fishing gear justified in order to protect right whales? No.

Although entanglement in fishing gear was implicated in nine NARW deaths since 2017 (all but one of which occurred before 2020) and 19 serious injuries, none of these deaths was caused by entanglement with lobster fishing gear. NOAA’s own data covering all whale species show discarded fishing nets, long-line fishing gear, monofilament, and nets—all tied to large-scale commercial fishing operations—are responsible for the vast majority of whale entanglement injuries. From 2020 through 2022, NOAA has determined that no right whales were injured from entanglement in Maine lobster fishing gear. Evidence cited in the lawsuit filed by the Maine Lobstermen’s Association and the State of Maine’s Department of Marine Resources indicate that there has never been a documented whale death or serious injury linked to the Maine lobster fishery.

While lobster fishers likely haven’t been contributing to NARW deaths, it is undisputed that vessel strikes, both in U.S. and foreign waters, have. Which brings us to the Biden administration’s second hypocritical move. It is allowing thousands of offshore wind turbines to be built smack-dab in the middle of the whale’s migration route and habitat. As I detailed in an earlier post, in its effort to fight climate change the Biden administration has initiated efforts to build 30,000 megawatts of traditional offshore wind facilities (with structures attached to the ocean floor) in federal waters by 2030, and an additional 15,000 megawatts of floating industrial offshore wind power by 2035.

This means hundreds of ships and service boats will traverse the whales’ migration route during construction, making thousands of round trips. Even after construction has ended, service boats will pass in and out of the area to perform maintenance and repairs. Increasing boat and ship traffic significantly raises the chances of additional ship strikes on the whales.

In addition, the sound produced when anchoring the offshore turbines, during their construction and throughout their operational lives, is almost certain to drive NARWs into busy shipping lanes, almost guaranteeing more vessel strikes. Who says so? Why, Sean Hayes, chief of the protected species branch at NOAA’s National Northeast Fisheries Science Center, who, in a letter to the Interior Department objecting to the reckless expansion of offshore wind, wrote:

“Additional noise, vessel traffic and habitat modifications due to offshore wind development will likely cause added stress that could result in additional population consequences to a species that is already experiencing rapid decline. Wind turbines may disrupt the dense concentration of zooplankton that the whales depend on for sustenance, potentially forcing them to spend more energy and take more risks searching elsewhere for food.”

Groups dedicated to saving whales are also objecting to Biden’s plans for a chain of industrial wind projects up and down the east coast. Ten whale and sea life conservation organizations sent an official letter to Bureau of Ocean Energy Management (BOEM), the agency in charge of approving offshore energy projects. They object to the Biden administration moving forward with offshore wind plans and approvals without a comprehensive environmental impact statement demonstrating that such projects would have no deleterious impacts to NARW populations.

“BOEM, under Biden-Harris Administration, continues to decline to make an Environmental Impact Statement (EIS) prior to lease sale of ocean areas, even knowing that such lease sales, with 100% certainty, will result in sea floor exploration/SAP activities requiring ensonification, and knowing that based on the sound frequency at which NARW communicate, adverse effects on the remaining NARW population of such sound-producing site-characterization activities are highly likely. Likewise, BOEM, continues to issue determinations of “no significant impact” in Environmental Assessments of lease area exploratory activities (“site characterization”) by the lessee-developers. There is reason to find that such determinations are inappropriate, and that a full review of such activity is warranted.

In sum: Despite no demonstrated history of Maine lobster traps killing or significantly harming whales, lobster fishers’ activities must be severely curtailed to prevent harm to the NARW. But Biden’s offshore wind farms, which pose a clear and present danger to NARWs’ continued survival, are moving forward off the coast of Delaware, Massachusetts, Maine, New Jersey, New York, North Carolina, and Virginia.

Yeah, Biden is real concerned about the whales.

BTW: Is the Stewardship Council Compromised as Well?

Back to Whole Foods’ decision to cease selling Maine lobsters. I’ve got no objection with a private grocery chain selling or not selling any particular product. If they think that will make their customers happy, so be it. However, I do believe such decisions, when the livelihood of workers is at stake, should be made with eyes open, based on the best available data.

Whole Foods made its decision in large part based on the Marine Stewardship Council’s decision to decertify the Maine lobster fisheries product as sustainable. As I discussed above, whether Maine lobster harvesting is having an impact on whales is much in dispute. In contrast, the impact of vessel strikes is not.

Here the Marine Stewardship Council arguably has an image problem.

In the end, the right whale  faces many threats. But neither climate change, nor likely lobster fishing, are significant among them. By contrast, the erection of thousands of huge industrial wind turbines and the increased shipping traffic in whale habitat and migration corridors will push the NARW farther along the path to extinction.

Yet the Biden administration has thus far allowed wind developers to keep their analyses on the impacts of various offshore projects hidden, as if they were proprietary corporate secrets. And the Biden administration itself is moving forward with environmental impact statements required for offshore wind approvals before the NMFS has delivered the biological impact statement on whales required by the Endangered Species Act and prepared a mitigation plan.

Now we know how how truly concerned Biden and his cronies are about government transparency and the fate of the North Atlantic right whale—not to mention the Maine fishers who supplied 200 lobsters for the Bidens’ latest state dinner.