Forbes  has removed Michael Shellenberger’s column titled “On Behalf Of Environmentalists, I Apologize For The Climate Scare.” Forbes doesn’t say why on the empty page.

For years, Michael Shellenberger, a Time magazine “Hero of the Environment,” has been a constructive critic of the environmental movement. Now, he is blasting away at fears of climate change, outraging organizations such as Climate Feedback, a watchdog for articles that do not abide by the climate change “party line.” 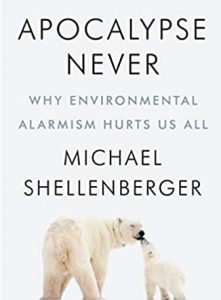 The Guardian  obtained a statement from Forbes about the removal. The newspaper wrote: “Forbes told Guardian Australia the article was removed ‘because it violated our editorial guidelines around self-promotion.’”

It is true that the article, “On Behalf Of Environmentalists, I Apologize For The Climate Scare,” promotes his new book Apocalypse Never, which has been favorably reviewed. Of course, the publicity around censoring will draw even more attention to it.

Here’s a link to Shellenberger’s  article in the same vein in The Australian.